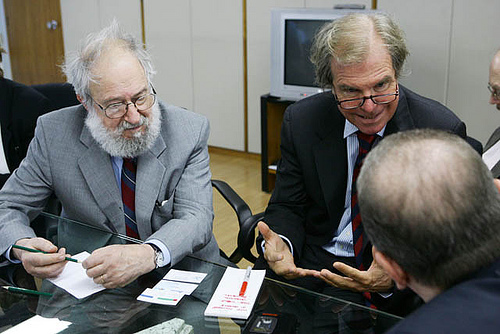 Dropped by EASE
November 21, 2021
STEAM Pedagogy
EASE- European Association of STEAM Educators is a non-profit association whose activity has the ultimate objective of helping and enhancing the work of all educators and teachers in terms of promoting STEAM skills with children, young people and adults in formal and non-formal education. Join our network!

Piaget and Papert are both constructivists in that they view children as the builders of their own cognitive tools, as well as of their external realities. For them, knowledge and the world are both constructed and constantly reconstructed through personal experience. Each gains existence and form through the construction of the other. Knowledge is not merely a commodity to be transmitted, encoded, retained, and re-applied, but a personal experience to be constructed. Similarily, the world is not just sitting out there waiting to be to be uncovered, but gets progressively shaped and transformed through the child’s, or the scientist’s, personal experience.

Piaget and Papert are also both developmentalists in that they share an incremental view of knowledge construction. The common objective is to highlight the processes by which people outgrow their current views of the world, and construct deeper understandings about themselves and their environment. In their empirical investigations, Piaget and Papert both study the conditions under which learners are likely to maintain or change their theories of a given phenomenon through interacting with it during a significant period of time. Despite these important convergences, the approaches of the two thinkers nonetheless differ. Understanding these differences requires a clarification of what each thinker means by intelligence, and of how he chooses to study it. In appearance, both Piaget and Papert define intelligence as adaptation, or the ability to maintain a balance between stability and change, closure andopeness, continuity and diversity, or, in Piaget’s words, between assimilation and accommodation. And both see psychological theories as attempts to model how people handle such difficult balances. At a deeper level, however, the difference is that Piaget’s interest was mainly in the construction of internal stability (la conservation et la reorganisation des acquis), whereas Papert is more interested in the dynamics of change (la decouverte de nouveaute). Allow me to elaborate: Piaget’s theory relates how children become progressively detached from the world of concrete objects and local contingencies, gradually becoming able to mentally manipulate symbolic objects within a realm of hypothetical worlds. He studied children’s increasing ability to extract rules from empirical regularities and to build cognitive invariants. He emphasized the importance of such cognitive invariants as means of interpreting and organizing the world. One could say that Piaget’s interest was in the assimilation pole. His theory emphasizes all those things needed to maintain the internal structure and organization of the cognitive system. And what Piaget describes particularly well is precisely this internal structure and organization of knowledge at different levels of development. Papert’s emphasis lies almost at the opposite pole. His contribution is to remind us that intelligence should be defined and studied in-situ; alas, that being intelligent means being situated, connected, and sensitive to variations in the environment. In contrast to Piaget, Papert draws our attention to the fact that “diving into” situations rather than looking at them from a distance, that connectedness rather than separation, are powerful means of gaining understanding. Becoming one with the phenomenon under study is, in his view, a key to learning. It’s main function is to put empathy at the service of intelligence. To conclude, Papert’s research focuses on how knowledge is formed and transformed within specific contexts, shaped and expressed through different media, and processed in different people’s minds. While Piaget liked to describe the genesis of internal mental stability in terms of successive plateaus of equilibrium, Papert is interested in the dynamics of change. He stresses the fragility of thought during transitional periods. He is concerned with how different people think once their convictions break down, once alternative views sink in, once adjusting, stretching, and expanding their current view of the world becomes necessary. Papert always points toward this fragility, contextuality, and flexibility of knowledge under construction.

Last but not least, the type of “children” that Piaget and Papert depict in their theories are different and much in tune with the researchers’ personal styles and scientific interests. Note that all researchers ‘construct” their own idealized child. Piaget’s “child,” often referred to as an epistemic subject, is a representative of the most common way of thinking at a given level of development. And the “common way of thinking” that Piaget captures in his descriptions is that of a young scientist whose purpose is to impose stability and order over an ever-changing physical world. I like to think of Piaget’s child as a young Robinson Crusoe in the conquest of an unpopulated yet naturally rich island. Robinson’s conquest is solitary yet extremely exciting since the explorer himself is an inner-driven, very curious, and independent character. The ultimate goal of his adventure is not the exploration as such, but the joy of stepping back and being able to build maps and other useful tools in order to better master and control the territory under exploration. Papert’s “child,” on the other hand, is more relational and likes to get in tune with others and with situations. S/he resembles what Sherry Turkle describes as a “soft” master (Turkle, 1984). Like Piaget’s Robinson, s/he enjoys discovering novelties, yet unlike him, s/he likes to remain in touch with situations (people and things) for the very sake of feeling at one with them.3 Like Robinson, s/he learns from personal experience rather than from being told. Unlike him, s/he enjoys gaining understanding from singular cases, rather than extracting and applying general rules. S/he likes to be engaged in situations and not step back from them. S/he might be better at pointing at what s/he understands while still in context, than at telling what s/he experienced in retrospect.

Along with Piaget, I view separateness through progressive decentration as a necessary step toward reaching deeper understanding. Distancing oneself from a situation does not necessarily entail disengaging, but may constitute a necessary step toward relating even more intimately and sensitively to people and things. In any situation, it would seem, there are moments when we need to project part of our experience outwards, to detach from it, to encapsulate it, and then reengage with it. This view of separateness can be seen as a provisory means of gaining closer relatedness and understanding. It does not preclude the value of being embedded in one’s own experience. On the other hand, Papert’s view that diving into unknown situations, at the cost of experiencing a momentary sense of loss, is also a crucial part of learning. Only when a learner has actually traveled through a world, by adopting different perspectives, or putting on different “glasses,” can a dialogue begin between local and initially incompatible experiences. To conclude, both “dwelling in” and “stepping back” are equally important in getting such a cognitive dance going. How could people learn from their experience as long as they are totally immersed in it. There comes a time when one needs to translate the experience into a description or a model. Once built, the model gains a life of its own, and can be addressed as if it were “not me.” From then on, a new cycle can begin, because as soon as the dialog gets started (between me and my artifact), the stage is set for new and deeper connectedness and understanding. In his book, The Evolving Self, Kegan elaborates on the notion that becoming embedded and emerging from embeddedness are both needed to achieve deeper undertandings of oneself and others. To Kegan, human development is a lifelong attempt on the part of the subject to resolve the tension between getting embedded and emerging from embeddedness (Kegan, 1982). In a similar way, I think of cognitive growth as a lifelong attempt on the part of the subject to form and constantly reform some kind of balance between closeness and separation, openness and closure, mobility and stability, change and invariance.